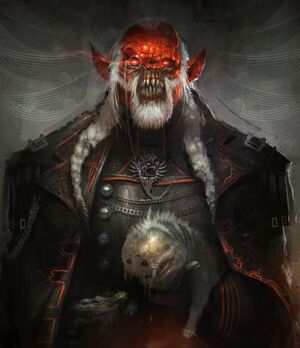 Zomboss - probably the most bloodthirsty commander in the history of Coraab. He loved his subjects so much he led them all to their doom.
(Coraabia Artist: Remko Troost)

History has not known a more powerful and feared Zomb since the times of the Upper Dump. A legend has it that he emerged from the depths of the radioactive Lake Wat-Pagae and, with Wohraab firmly in his grip, created the largest Unliving state ever pretty much from scratch. His real name and origin are shrouded in mystery; however, taking into account the discovered skull fragment, Zomboss could have very well been four thousand years old. Zomboss never hesitated to show either uncontrolled fits of rage or displays of utter tenderness towards his favourite subjects: the now-extinct Atomi. 'The leader of the Zombs' achieved his first military successes precisely through uniting the numerous lakeside settlements of Atomi. It took only few years for his realm to stretch from the Isles of Dren in the North to the Rusty Dunes in the South - vast beyond comparison, this empire has not seen its equal since.

Not a single piece of Wohraab has been preserved to our days. Many claim it was but a fabrication of sensationalistic chroniclers; others argue it might not have been necessarily a weapon. They suggest that Wohraab was merely some kind of a battle standard. Yet another group swear to it being a mighty artefact made by the Pthars themselves. For centuries, its true nature has been possibly the most hotly contested topic among archaeologists on Coraab.

After the betrayal of Du'Baels and during the cruel era of Atomic Genocide, Zomboss planned to leave the realm and outlast the hard times in exile. However, upon leaving his chambers, he was surrounded by elite troops of skeletal warriors - and was finally felled after several hours of fierce resistance. His body was burnt at the stake but the head was saved by a handful of Atomic survivors, who hid it in the save depths of the Dump.