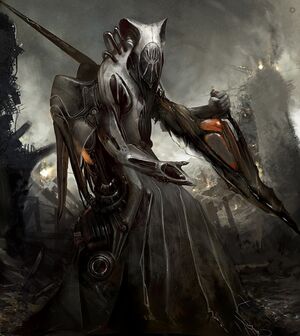 Zombolt was outright possessed with history. It is said he searched in the depths of Dump for evidence that Unliving tribes were direct descendants of the culture of the very Pthars.
(Coraabia Artist: David Munoz Velazquez)

Wrhha'Olt means Lord of the Dump and that was indeed the nickname Zombolt heard on his thousand-years long journey through Coraab most often. The ancient and highly educated Zomb cared about his age a lot - this ingenious Unliving technologist constructed an artificial "skin" to his aid, which would conserve his body while the bio-suit was autonomously handling everything that required attention. Thus you could have never been sure whether you were actually speaking with Zombolt or whether this Zomb slept through your whole life and his suit communicated with the surrounding world in his stead. Zombolt traveled throughout the whole world and actively studied his race. The mighty Unliving eventually met an unexpected end in the ground zero of a ban-bomb dropped without a single warning on the Unliving state Wa'Ghra in the first years of Miners' occupation.

As seemingly the only Zomb in recorded history, Zombolt crossed the magic threshold of ten thousand Tu of age. He consistently avoided armed conflicts and devoted himself to his unlife's mission - a search for other Zombs waiting to be awakened in the depths of the ancient Dump. He supposedly helped up to eight hundred members of his Unliving tribe to see the light of the day.

Zombolt was the direct creator of the mutant tribe Zombo. From remnants of old Zombs, he cloned their "castings" in an effort to create a new generation of those who would not be destined to a long unlife without descendants like Zombs were. Zombolt was a big elitist who wanted to usurp the planet solely for his people - a stance for which he still merits a nearly deified admiration of the most irreconcilably tradicionalist Zombs.