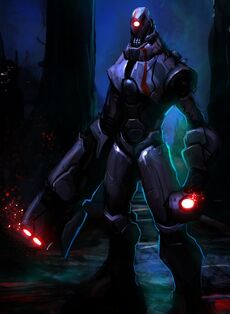 A pulse electroshock gun CHOA-3 and small but powerful shocker from Eephra are the weapons of choice for many Zamsus.
(Coraabia Artist: Steve Hamilton)

The only word which fully epitomizes the rank of Zamsu is militia. Probably every Sector in C'Ora has its own Zamsu, who is changed every three Guls. This office was once established with the purpose of efficiently bridging the gap between the police force and local citizenry. Zamsu thus lives in his precinct and is well-acquainted with his surroundings. In case of trouble, the old-time residents often preffer contacting their Zamsu to alarming conventional police; they feel he actually understands their problems. Oftentimes, he is a friend of a friend. While Zamsus themselves lack official powers, they compensate for it with their great natural authority and respect of the neighborhood. During their duty, they are also limited to using non-lethal weapons only.

Zamsu's official working hours never end. He is paid solely for the actual amount of work he finishes; he also has to handle all the paperwork connected to it. Especially in the better off and safer districts, this often leads to bizzare situations – Zamsus in need of some quick buck have to do minor housework, work as boters or teach self-defense.

Such practice was perfected in one absurd case, when Ploy uncovered a complex network of ketamush dealers, which led him all the way to the local Zamsu. Until that time, no one found it odd or surprising that this corrupted official never received any money from his superiors for 8 years and instead happily focused on masterminding the local underworld.