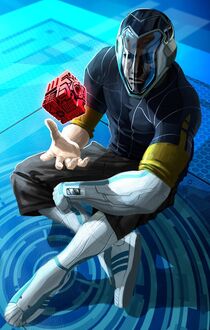 Aran Ymar, as a child, is spending countless Uns on sub-net. He even managed to build his own sub-ware for its receiving. So there is no wonder, that this talented Miner started to study Sub-Mag discipline on Orbital University. His excellent results granted him titanium diplom and he becomes one of the best Sub-Mags on Coraab. But his life takes unexpected way. Ymar, after several successful intersections into guarded networks, becomes a member of the hacking caste Ko-Mag. Although after some time, he discovers that he is not made for hackers life. He is very close to be revealed during a Sub-war and he starts to suffer on depressions and "solving" all his problems by ethanol. One day he meets Sandera in bar Karru-Ba and she offers him job with Planetary Kops. Decimated Ymar gladly takes this offer.

Ymars is doing very well with Planetary Kops and he finds a lot of friends there. But certant Kop is closer to him than others. He felt hopelessly in love with Tia Sandera at the very first time he met her in bar. During a routine inspection of sub-ware in Sector 14, Aran loses patience and ask Sandera for her hand. At that time Tia is already married and refuse him with thanks.

Ymars colaboration with caste Ko-Mag is successfully kept in secret. He didn't tell even to Sandera, with whom he has despite an unforfilled love an intimate relationship. Yet his experience as a hacker is priceless at defense of the planetary network. And its also due to Ymar, that last several decades Tu, there was no serious sub-space attack at Coraab.