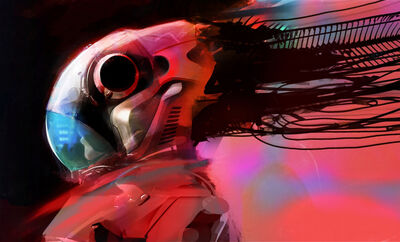 Several years ago, a gang of agresive Bio-bots ambushed a convoy of a coraabish diplomat. The following massacre has been survived only by a girl called Ygwara. Even today, it stays a mystery why the deadly bots spared her. The reason could be a combination of artificial hand, which she had after a severe accident, and the aged circuits of the attackers. It stays a fact that when the gang was finally beaten, Ygwara felt more like a robot then a being. For her coldbloodness she became a sought-after mercenary and her dream is a complete robotization of her own body. Today, it is not certain whether there is anything left out of the original Ygwara besides the thick dark hair which she proudly wears.

Ygwara strongly identifies with the feared Redds whom she considers the most effective and therefore perfect race. The rumors of active contact of cybernetic underground with Redds are being constantly checked by secret service. The group of sympathizers which is led by Ygwara is considered a terroristic threat by the coraabian administration.

Ygwara almost suffered from her pursuit for new technologies when she had a non-tested jammer of police signals installed into her agrava. This resulted as an attack of several hundreds of semi-mad hanths who gushed out from the nearest sewer outlet. The high-frequency tone drove them into insanity.