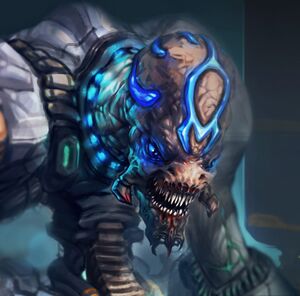 Bael Xott first appears in the aim of sub-journals in 4230 Tu, when he served in security team of mining company ToZanX. During routine corabit transportation to Ulgor, his magrav comes under attack of Galathugs. When the first emergency response unit arrived to the damaged ship, they found only one surivor – Bael Xotta, sitting next to a pile of corpses in front of the sealed cargo bay door. After this, Xott becomes a sub-celebrity overnight. Shortly after, he receives an offer to join Bahoofa, the elite coraabian police unit, which he accepts. He becomes one of the best Baels in the corps, but is not liked very much. The most likely reason is that he does not communicate much with his colleagues, does not have any friends, has no interest in finding a mate and simply put - he likes to work alone. Any effort to find out something from his past immediately results in a wave of anger.

In 4238 Tu, a sub-porter of the investigative CorCHA channel named Ner Caal embarks on an investigation, following trails of Xott's past. These lead him to the infamous Zapraskal's gang, where - allegedly - some Bael has worked in the past. The article An outlaw or a hero?, which Ner Caal publishes soon after, brings him a lot of publicity. In the following attempt to get an interview, Xott throws him through a window.

To stop these accusations, Bael Xott officially overtakes the task of tracking down the Zapraskal's gang. Altough his effort was considerable, he does not manage to arrest not even one single member of the gang, which increases the accusations instead of decreasing them. Not even the corps' command trusts him anymore and only assigns him to trivial cases ever since. The offcast Xott keeps working on the case of Zapraskal's gang on his own, though.