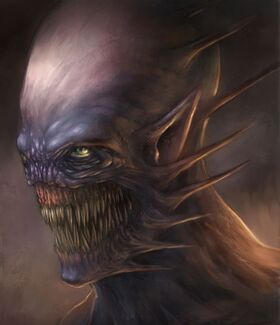 Xogs are dangerous beasts with a boundless appetite - they can absorb virtually all organic compounds.
(Coraabia Artist: Ali Tunc)

The Coraabian police forces did not have to solve such a tricky case for a long time - all the forty-two murdered Coraabians (among them a random mixture of races – five Dungs, two Miners, a homeless man and an important thinker Ikrill) were connected by a single common lead: only bare skeletons were left of their bodies. The case occupied several departments for years while the victim count steadily climbed. In each and every case, the body was stripped off all tissues and organelles. On a random patrol, Torrent finally traced a nest of a strange creature that nearly killed him - it was a rare Xog from distant Mogra Troi. The O.E.S. (Office for Extreme Situations) got involved in the case and called the specialists from Cosmopolitan Worlds for backup. Xogoth the Devourer was found and killed at last.

Xogoth was felled by Qukkk, who covered himself in a gel of his own provenance before the encounter, rendering himself immune to Devourer's etching glands. For this socially beneficial deed, the O.E.S. awarded the title Eo.PaP.S-cll to Qukkk, though nobody ever compensated him for the expenses incurred during the production of that expensive ointment.

After his first death, Xogoth imploded back into a larval stage and drained away from the local morgue to sewers, where he might still live in his secondary state, happily sucking enzymes from waste. The O.E.S. vigorously denies these allegations. One can still measure trace levels of radiation in places where Qukkk moved while covered in his gel.