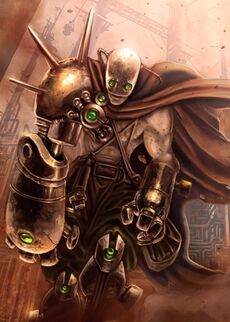 Originally known also as Toch'Thubo - the shepherd of tunnels. When the Miners spotted one of the many underground complexes (which is Coraab literally riddled with) while uncovering new dump deposits, they sent one of the specially trained Xochts into the murky depths first. Initially, it was an occupation simply bordering with suicide for those performing it. But the Unliving Xochts perfected their techniques during the centuries of mapping the uncharted territories and became completely accustomed to their new profession. A real Xocht must possess three sacred attributes - an Onght helmet which turns darkness into pure light, a Bokotaar badge which always shows the right way, and a sacred mecha-arm Pom'Karra which is a key to all chambers of the world. Tunnelers were keeping these ancient artifacts in boundless reverence.

As time went by, the mortality of Xochts was successfully reduced under bearable 30% during the first five years of practicing their trade. It was the Miners who imposed the Tall Tale of Three Artifacts upon the Unliving explorers. Allegedly, these items came from the Nu'Beings themselves; in reality, it was a mass-produced helmet with infravision, a low-grade malachite brooch, and a limb of a long time ago discarded series of Metal-Bot.

This ancient profession disappeared in conjunction with the demise of the original Miners' colonies from Coraab. Remaining Xochts made their living in the newly built C'Ora as prospectors of the local sewer system for several decades, but after the authorities banned the wearing of any divine relics, they disappeared completely. The last Xocht was found in a Burruk'nudhan faeces tank in 1781 Tu.