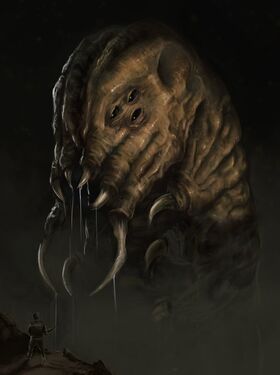 For long generations, each ruler of the Xo-Tcha civilization had to undergo a holy trial. Each of them had to descend to the very bottom of the XacCcava crater and in the endless labyrinth of cave tunnels and halls find a mythical being, the Xo-Roa prophet. To become an eligible ruler of its people, the monarch had to undergo a ritual, during which he sacrificed his eldest child to the prophet. If the fate was kind to him, Xo-Roa blessed him with his secretion, which revealed to him the future and made him the new ruler of the Xo-Tcha civilization. In case he was not deemed worthy enough, the prophet would save him from the public shame and mercifully put him to death in the labyrinth. The inscrutability of the ritual thus became a nightmare of the monarch families, but it was the only way to legitimize their power.

The Xo-Tcha chronicles date the cancellation of the holy trial to 2208 Tu - a year full of mourning for prince Ox-Ten and his first-born son, who both died in the caves of XacCcava. The elder ruler Xomol-Trak completely collapsed upon learning about their deaths and despite protests of the people and priesthood ordered bombardment of the crater. Not long after the event, Xomol-Trak left the palace for good and disappeared in the wilderness of CuCaan, never to be seen again.

Results of preliminary exploration of xenoarcheologists suggest that Xo-Roa was likely a member of a rare Titano-caterpillars species of the MbucC genus. These are capable of excreting strong hallucinogenic secretion, which was causing the soon-to-be Xo-Tcha rules to have very vivid visions. An interesting fact is that Titano-caterpillars are pure herbivores. The deaths of the approaching rulers are believed to have been caused as a result of suggestive paranoiac imaginations.