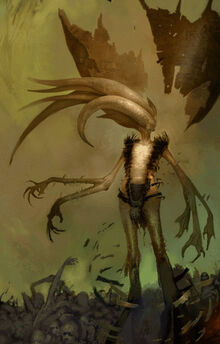 Maybe as far back as during the evolutionary process in the nymph cocoon, young Xed was decided to become a xennist since he has been always captivated by exotic flora and fauna. His life had a fateful challenge prepared for him early on – the CuCaan government announced a new project where Xed gained a prestigious expeditionary captainship after succeeding in a difficult admission process. One of the crucial criteria was his ability to easily withstand extreme environmental variations; a trait typical for members of the Xo-tcha race. Together with the crew of the special research vessel Cuccar-1 (equipped with a, at that time undisclosed, revolutionary drive), Xed visited countless uninhabited worlds of Xennozone. After returning home, he used the information from his detailed and perfectly catalogued samples to write A Treatise on Vital Base, which brought about a revolution in general xennology.

As a being based on a silicon-selenium base, Xed has always been fascinated by "carbonians", as he calls the most widespread forms of life in his private notes. However, the biggest surprise for him was the encounter with the Coraabian Unliving. Xed has brought tens of them back to his homeworld CuCaan without making an unnecessary fuss of it over the course of his career; all of them perfectly dissected and pickled in formaldehyde, of course.

In the town of CuCaakh, rumour has it that the precise scientific works were not written by Xed but by his long-time assistant Drinndo. Contrary to this speculation stands some rock solid evidence that Xed has recently written at least two successful works – Drinndo returned from one of the expeditions perfectly dissected and pickled in formaldehyde as well.