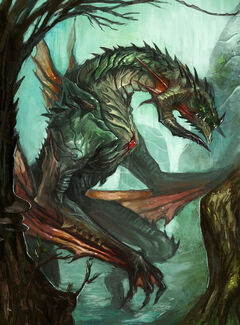 A monumental shadow flew over my head – that moment seemed to last for all eternity. There was no need for lifting my head up – who else but these majestic creatures could overshadow the whole sky of the Green World? - Qan Koolai • 4228 Tu
(Coraabia Artist: Emerson Tung)

Should we search for an expression in our language that would be equivalent to the Annorian term Xago, the word 'dragon' would come to our mind first. Xago is one of the largest animals of Annorian fauna and probably the most majestic one as well. Xago was subject to intensive hunting because of Xago’s Stone, a diamond-like chest body wanted by virtually all rulers in Coraabia. Although its hunting was outlawed by Annorian government few centuries ago, Xago may still appear on the black market from time to time – the price is simply too tempting for the poachers to abide by the rules. As a result, Xago's diminishing numbers are still alarming - only one hundred of these majestic creatures still roam across Annor today. Later research has proven that Xagos are more intelligent than we expected and that they form strong relational bonds during the course of their lives.

Long years ago, Coraab bought a pair of Xagos to raise the prestige of the planetary xennoZoo. After few weeks, the male Xago managed to fly away thanks to its exceptional agility and has not been found yet. The female Xago was poisoned by a mentally ill zoo visitor who committed suicide by self-immolation in a nearby shopping mall shortly afterwards.

Police officers are commonly called xago in teen slang in C'Ora. No one actually knows what gave birth to this nickname as there is no proved link between these rare creatures and the police force. Terms labor like xago or to xago the crime scene are used around the precincts as well.