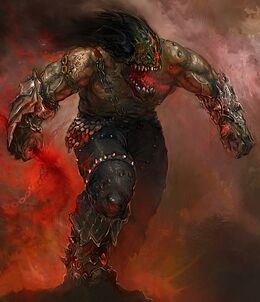 Thanks to their brute-like power, the wreckos would definitely shine in the arenas of Sokurr today. However, the sands of time swept them away just like the old Tal colonies.
(Coraabia Artist: Ivan Kash)

The word whrecckg is the worst insult imaginable in the language of Dungs, used to call hybrids spawned by mixing genoms of several Unliving tribes. Later on, the word wrecko has also been given to living mutants tailored to the needs of Miners during the colonial era. Wreckos, most frequently imported from the subjugated Min'Ora, were ideal even for the hardest labor, which even the most hardened Unliving slaves would hesitate to do. These Whrecckg were hated by the Unliving for their lowly instincts and questionable origin. Their conflicts frequently ended in bloodsheds. A Miners' saying went: "If you want to employ one wrecko, buy at least three."

The wreckos were custom-bred by the osteomancers from Min'Ora for long centuries. They had to be exported from the city in darkened transports, because otherwise they would be lynched by the crowd. The stench of wreckos drove even the most well-ordered citizens to insanity.

The Tal colony H-tal was the first to equip its slaves with obligatory protective masks. What the Miners did not realise was that Dungs can smell odors with their skin and they let them work in mixed squads with wreckos. Clogged turbines filled with torn bodies of both races interrupted the smooth running of the colony for several days.