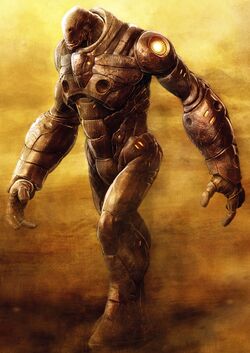 The legendary liberator of Min'Ora from the Miners' thrall, one of the greatest modern patrons of the Zomb and Unliving culture. Wohrra appeared in Mino long before the arrival of Miners. He worked as a mining foreman in the Great Corabit Well. Like many of his kin, he protested against the Tal colonization of Coraab by shrinking in his ree. When he awoke around 770 Tu, he could not believe his eyes - Miners' colony Ora was spreading next to the ancient city of Mino like a huge metallic ulcer. Wohrra immediately realized it was paramount to get rid of the new Tal overlords but it took almost 250 Tu before his ingenious plan could come to fruition. His patience was rewarded when he succeeded in his fight for independence, becoming a celebrated legend of his nation. Wohrra voluntarily ended his uatta shortly after the foundation of the centropolis C'Ora.

Wohrra's plan was very opportunistic. He severed his connections with Zombs and claimed that only Tals were entitled to carry out excavation on Coraab. Zombs were furious and could not forgive him his treason. Wohrra formed an elite squad of Dung dumpdiggers and continued to work under the leadership of Miners. Entire Tal generations eventually accepted him as a willing collaborator worthy of utmost trust.

At the moment Wohrra was about to publicly receive the title Lop'Akka (an almost-Miner), the highest decoration an Unliving collaborator could aspire to get, he proclaimed Ora a stinking hellhole that should be razed to the ground. The Miners were confused and the Unliving suddenly realized Wohrra's true intentions. Hundreds of thousands of protesters flooded the streets of Mino and Ora. The ensuing coup made sure the Unliving could finally enjoy their long-awaited freedom.