The Unliving are summarily referred to as lopta in the language Coraabish. The word popthara then synonymizes the "Unliving brood", the entire race with all its tribes and subtribes. In the language Zomb'Skaraa, an Unliving is called tothar.

These days, Coraab is probably the only world in Coraabia inhabited by "indigenous" Unliving tribes. Earlier presence of the Unliving was repeatedly proved on other worlds as well (e.g. BaMal, Khnu, Ertu, Bolga) but that heritage remains solely in the realm of historical fragments and fleeting memories. 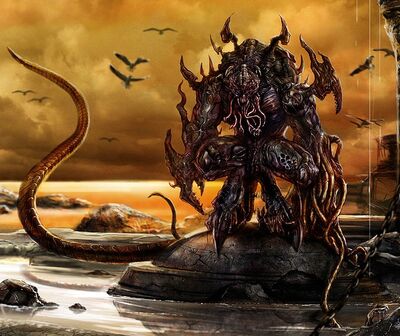 The mighty Untethan - one of the mythical Unliving leaders from ancient times.
(Coraabia Artist: Tariq Raheem)

The Unliving arrived on Coraab along with the Dumpers around -36,000 Tu. Many traditionalistic min-logs claim that the Unliving tribes were created in times immemorial by the omnipotent Nu'Beings who viewed them as their perfect offspring. Nevertheless, it has already been scientifically proven that the Unliving flew on Coraab aboard the gigantic Dumpers' ships. Most probably, the Unliving were obsolete or faulty servants of the Haze cultures that were for some reason deported to the central regions of Coraabia along with other kinds of waste.

The Unliving then spent long millenia adapting to the harsh climate of Coraab and gradually claimed power over the planet. First concentrated settlements were founded on the banks of the radioactive Lake Wat-Pagae already around -20,000 Tu. These individualistic societies eventually transformed into ancient civilizations, the so-called Unliving states. The first major proven Unliving state was the Empire of the Circle born by uniting several Ilokajish settlements together in -3450 Tu. The Unliving states were at the peak of their power between -800 Tu - 0 Tu.

In the end, the Unliving states vanished one after another, with the city-state Min'Ora left as the most important one still standing today.

The Unliving tried to build a developed and proud civilization for centuries but a single event forever changed the course of Coraabian history.

The Arrival of Miners[edit | edit source]

0 Tu – This Tu was the most significant turning point in the modern history of Coraab, linked with the arrival of a civilization later known only as the Miners. It was not entirely clear where these living humanoids came from, but it went without saying they possessed technologies far beyond anything the local Unliving could even dream of; this imbalance could have been one of the causes of the first conflicts. Miners were systematically harassed by the Unliving in the north of the planet, which induced their hostile reaction. After hydrogen bombs obliterated several Unliving states, both parties reached a mutual, albeit fragile agreement. The Miners did not travel the staggering interstellar distance in their giant cargo magravs without a reason – they were fascinated by the Dump, the ancient planetary superstructure stretching beneath the thin layer of Coraab's soil, for it contained an astonishing amount of precious metals and substances which apparently seemed useless to the old Haze cultures. However, it represented a source of immeasurable wealth for the Miners: platinum or tri-buroten from the ancient spaceship interware, loads of defective synthetic diamonds, uranium from dormant reactors, the T'ung matter - all this gave cause for establishing huge mining stations and docks for Miners' spaceships on Coraab. In these so-called Tal colonies, the Unliving were used by many Miners as cheap labor. Plenty of them met their end in dump mines – heaps of rust and corroded alloys collapsing under their own weight, sealed toxic containers infecting large areas upon accidental damage – all this cost hundreds of thousands of workers their unlives. After thousands of years, the Dump once again opened its insides on many places and sowed death...

The arrival of Miners had a truly devastating impact on the Unliving tribes. It is estimated that as much as 155,000,000 Unliving workers died during their forced labor in the Tal colonies. The casualties among individual ethnicities were enormous. Dungs, Ilokaji, and certain subspecies of vatters were affected the most.

After the abolishment of Tal colonies, a significant part of the Unliving moved to the newly built centropolis C'Ora. There they still had to face intolerance and discrimination from the Miners. The situation finally got better thanks to the We'Rahhta Pathae, The Great Coraabian Declaration issued in 3491 Tu that finally equalized the rights and status of living and Unliving. 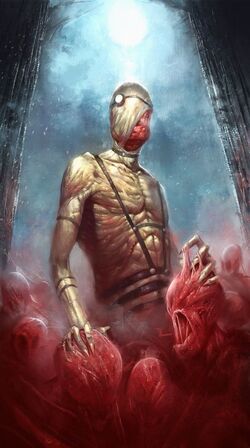 The legendary Zomb of the Gwah branch, known under the alias Dolwe. It is still unclear whether Dolwe was not inadvertedly confused with Radiocarbon himself in the ancient sub-logs.
(Coraabia Artist: PumpkinPie)

4223 Tu - The Great Coraabian Stem Cell Genebank (G.C.S.C.G.) is founded. By gathering high-grade Unliving genome, traditionalists want to maintain the "quality of the race" on the current level since the newest studies of scientists from Orbital University show that the genome has been dramatically deteriorating in the last few centuries.

The continuing degeneration of the Unliving genome (cor. anree) is probably the most serious problem the Unliving tribes have to face on today's Coraab. With each passing generation, the amount of genetic diseases and disorders grows and more and more lachtos, yellos, and other hideously deformed creatures crawl from the vats.

Another existential danger is the thinning out of Zombic ranks. In 4249 Tu, the last Zombs finally left C'Ora and returned to the cradle of the culture - the ancient Min'Ora. The problem is in their inability to reproduce - their numbers have been firmly set at the beginning of the history of Coraab.

The dark side of most Unliving nations is their total isolation from the rest of the world and sometimes fanatical xenophobia they demonstrate against visitors arriving on Coraab from all corners of civilized multiverse. As the Unliving are a highly maladaptive ethnicity, the rest of the Coraabian society does not want to have anything to do with them so they have to solve they problems among themselves.

The numbers of the Unliving on Coraab are constantly decreasing. The most sceptical predictions assume they will die out by the end of this millenium.

The Unliving are sentient beings that do not require air, water, or food for their continuing existence.

In the vast majority of cases, the Unliving resemble their living counterparts, they often have two pairs of limbs and a face with basic characteristics like eyes, nose, mouth, and teeth. This has been a long-standing question among experts - why were they equipped with organs they do not need? The scientists now agree their visual similarity to other races was probably an intent on the part of their ancient creators who simply wanted their Unliving servants to resemble themselves (or their other servants).

Some tribes (primarily Dungs, in exceptional cases even Ilokaji) do consume food but purely as a ceremonial act - mostly as a form of ritualistic cannibalism or as a manifestation of superiority or power.

The Unliving are a very tough race, they easily operate in anaerobic environment, extreme temperatures and pressure, and they are highly resistant to radiation and toxicity.

With some minor exceptions, the Unliving reproduce asexually. The Ilokaji use recycling pouches (cor. ilokho), the vatters have been crawling out of reproduction vats (cor. umkha) for millenia. Zombs do not reproduce at all.

The term Unlife is often misinterpreted by members of other races at first. Many think it means resurrected dead bodies or mindless machines. Nothing could be farther from truth. The distinctive feature of this ethnicity is their unliving genome. It carries signs of a sophisticated bioengineering manipulation and it a highly complex genetic structure that grants Unliving their many extraordinary powers. Experts claim the Unliving are the ultimate stage in the design of bio-robots as their bodies are void of any mechanical components. It has been long established the Unliving are artificially created beings.

The Unliving have their of kind of "cycle" (cor. uatta). It's progress varies dramatically across the individual Unliving tribes. It is also the reasoned why they can "die", basically terminate all their unliving functions. The reason for this might be mechanical damage or developed genetic degeneration that prevents proper functioning of the central nervous system.

The end of an unlife is referred to in Coraabish as rooa (zomb. reei). 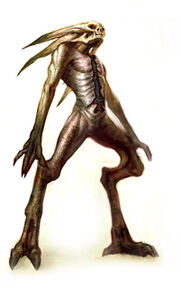 The Unliving are divided into several main Unliving tribes (cor. lopthakarr). Those have a complex hierarchy between themselves. 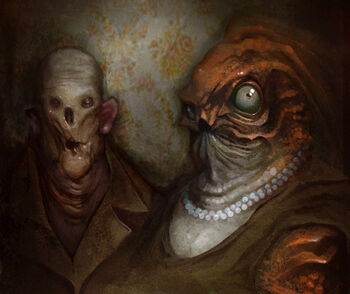 The idea of a union between an Unliving and a xalien is the worst nightmare of many traditionalists.
(Coraabia Artist: Manuel Augusto Dischinger Moura)

An Unliving vatter is spawned in a reproduction vat. In the first Uns of its genesis, it is impossible to discern to which Unliving tribe it will belong.
(Coraabia Artist: Doug Williams) 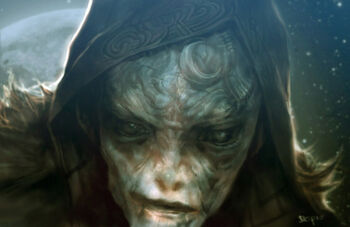