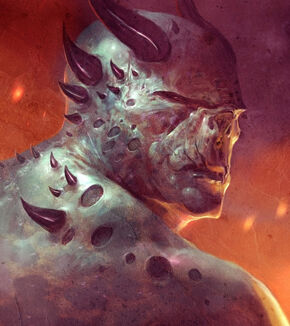 The name Omtha'Ro has terrified decent Coraabians all over the planet for long decades. Now it is over - the grim Undang is no longer alive.
(Coraabia Artist: Johann Bodin)

His comrades nicknamed him Omtha'Ro - The Gambler Terminator. Undang possibly went through every single influential criminal organization on Coraab. He started as an underling of Lin Rezzt, then he tried his luck as a Corporator and he also took part in several regional wars on Khalfass and Ulgor. After he returned on Coraab, he worked as a bodyguard for Xun Tchwo himself. Undang was always a merciless sadist. He enjoyed when some of his subordinates made a mistake, no matter how small it was. It offered Undang a chance to punish him cruelly. He would spend a fortune for ethylene substrates or just gamble his entire wage away at once on illegal Sokurr fights. Undang's unscrupulous behavior netted him a long list of enemies avross the entire Coraabia.

For decades, Undang was a member of a top-secret separatist force Unree that fanatically strived for Min'Ora's total isolation from the outside world. The most frequent targets of the terrorists were huge centropolitan districts. Their most fateful massacre was the infamous Pam'Tol in 4134 Tu when Unree detonated charges placed beneath the stadiums of the fabled 310. Coraabiad

It was Tessar, a Zomb from Min'Ora, who had Undang murdered in the end. He was afraid the arrogant Antu would disclose key information about clandestine cells of Unree since he was the only member who was not of Unliving origin. The betting company Poi-Monk was the only one to regret his death. Undang allegedly owed them up to several million trins.