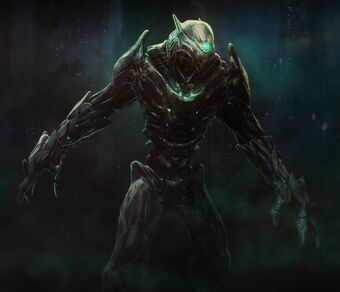 Uma Xins play a key role in the neverending clash between Xin order and the intelligent Xa mass - word uma literally means exterminator. Their training camps lay deep in the hollow planet Grannok in the remote Xennozone. The surface is no longer safe as the Xa mass is unstoppably growing and with it, the deadly daemons. Uma Xins pump millions of hectolitres of experimental chemicals from underground lake-like tanks, trying to liberate the mass-overgrown territories. While Neo Xin fight mercilessly on the surface, bionicaly enhanced Uma Xins stand on watch to stop any Xa's attempts to cross the underground defense lines.

Since the daemons are thought to be symptoms of Xa defence mechanisms and reaction to extraction attempts, the experimental chemicals are in fact strong sedatives, that are supposed to dull the Xa's immune system. No effective substance has been found so far, not without severe damaging side effects to the valuable mass.

Xins long fight the suspiction of earning money for their research through producing and distributingillegal drugs, that are supposedly shipped to Khalfass. Xa regulation office, resident on Coraab, has sent an inspection commitee to the Xennozone, it was however arrested at their way back with huge load of neo-bujka and opiates.