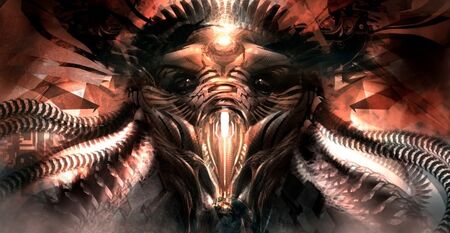 Today, the mythical figure of the coraabian history, by some unliving tribes still worshiped as the "Lord of War". According to legend, fighters from two legendary unliving cities of Wv and RRA annually competed in the arena for the rule over the mutual state. Zombs from RRA in the desire for absolute power let to create an invincible fighter Turbo-Kruul. Their engineers with the help of the mysterious occult practice arrested phase demon into a powerful robotic armor, found in the depths of the Dump. Energy of the phasebeing bestowed the machine with great power and also allowed him short space jumps. But the proud creators soon lost control over mindless killing machine and later at his aimless journey it destroyed entire countries, including both cities.

For an unknown reason Turbo-Kruul advanced in ever-increasing circles in its bloody campaign and so unliving eventually learned to anticipate his movements. Although the number of victims reduced due to the subsequent exodus of entire nations several centuries of Turbo-Krull’s bloody rampage allegedly left behind a hundred thousand massacred bodies.

Even though the Phase demon had no consciousness, the armor had to defend against an instinctive attempt to escape the way that he was always caught up and pulled back in the middle of the dimensional leap. The result was the occasional occurrence of other pandimenzional beings which presence multiplied caused chaos prior to return to their dimension. According to legend the phasebeing finally freed from an armor and the mecha-body was smashed to smithereens in the middle of the jump.