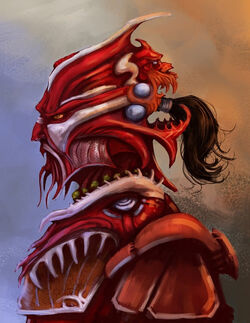 Tubon comes from an agriculture-oriented family, which left WaalkWak in 4102 Tu to become incredibly rich thanks to interplanetary trade with Hairy lager. Young Du'Zor is sent to study at the Bol'Karaa military academy, where he soon became known as an ambitous careerist. It is here, where he is noticed by intergalactic Hermes, who later makes him the heading armo of the [[anti-redd] MARRU units. Under Tubon's command, these units soon built up a reputation of brutal butchers without any moral barriers. Ideal recruits were usually those, who had nothing to lose. Although Tubon's commanding skills are disputable, his willingness to execute practically any Hermes' orders makes him one of the most dangerous armos of the coraabian armed forces.

When reports about Tubon's secret meetings with the Redd appeared, Hermes immediatelly disposed him of the commanding function to prevent the suspicion from falling on his own head. All the accusations were diminished, when both the sub-port evidence and the prosecutor's crown witness disappeared without a trace. Hermes subsequently proclaimed the whole case as made up and reinstated Tubon to his original post.

Tubon's career was accompanied by mysterious deaths from its very beginning. After three body remains of his teachers were found in Tubon's family's composting plant, the young cadet comes into interest of Investigos units. The investigation was stopped, however, when two elite investigators also got missing in the "guts" of the armos farms. The Hairy lager from Tubon's distilleries became a legend for its specific mudlike taste.