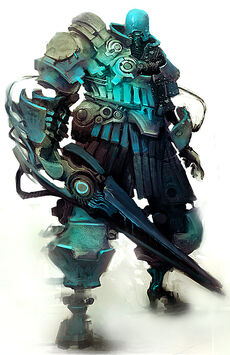 No one knows for just how long Tongenton has been operating across Coraabia. No one even dares to guess from which world or nation he came – and he leaves these questions unanswered. A wide space is opened up for speculations! -Pjaar Kanth • 4143 Tu
(Coraabia Artist: George Dimitriou)

Once a famous leader of the notorious Tongenton's Eleven later turned into one of the highest ranked officers of the security forces in Coraabia. His group was strictly hierarchic in nature and always counted exactly eleven members. An encounter with Liganor Trokafixx, a target for elimination, proved to be a fateful twist for the crew. From the entire Eleven, only Tongenton survived and had to rebuild his group from scratch - that much is known from the whole incident. The circumstances under which he later joined the Liga are shrouded in mystery as well. In 4112 Tu, Tongenton voluntarily succeeded Liganor Trokafixx as the third Liganor to ever lead the entire organisation. After thirty-three years of successful governance, Tongenton surrendered the post and retired to seclusion. Allegedly, Tongenton is alternately living on Khoptid and in an orbital laboratory constructed near the peripheral world of Khnu.

Tongenton boasts an ultimate psionic potential; some even claim he is able to peek into parallel universes. However, it was not until he ended up on the right side of law that he managed to control this potential - prior to that, he suffered from terrifying visions and pain. Indeed, the offer of special training and technologies native to Liga alone could have been the main reason of his unexpected cooperation.

According to a tabloid sub-journal Humpitch!, a starlet Ju'Nada became his lover. Given their gigantic height difference, these speculation cannot be taken too seriously, although Humpitch! goes to great pains to mention surprising details proving their mutual "compatibility". Nevertheless, this sensation is nothing but a pure myth – Tongenton has spent his entire bizarre life in strict celibacy.