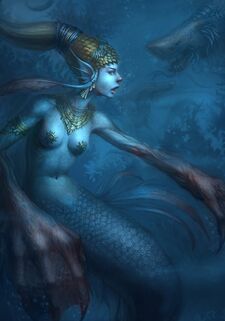 Tintagela is the sole representative of the Goshan people on Coraab. Her distant world is facing a crucial problem - the only continent of the dwarf planet Volkt is slowly rising from the depths of the methane ocean, which means the ocean could dry out completely in the next few centuries. Not wanting to let their civilization disappear for good, the Goshans are grasping at straws by seeking help wherever possible. As they are not well-suited for stay in the most common atmospheres, a relocation to a different world would likely lead to a complete disintegration of their culture. Tintagela therefore has a clear-cut task on Coraab - to gather as many resources as possible in order to facilitate the rescue of her people.

Tintagela's luxurious embassy is located just a few kilometers away from the newly established government of the city-state Bochezai. She lives in a large aquarium filled with semi-liquid methane, using a simple form of telepathy in order to communicate with her servants and leaving her office only when invited to one of the spectacular banquets organized by the Coraabian elite.

Since Tintagela's efforts have so far yielded nothing but a few decorative ceramic brooches signed by a regional star actor Ja-Barr at one of the lavish dinners, Goshans already begged their highest chancellor NiNiFe several times to replace Tintagela or to abolish the Coraabian embassy for good.