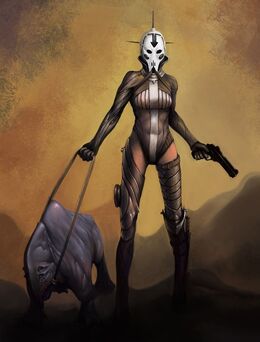 A difficult childhood in a family with a military background and her unbound personality drove Tien into the embrace of a young boter. They first traveled to Agan as a couple but their relationship did not last long and broke apart. The lovelorn Tien decided to try her luck elsewhere and chose the distant CuCaan. Here she found her living as a meta-insect taxidermist, enjoying the long journeys into the CuCaanish nature. After some time, the young Ekhro woman met Donner, who was not yet the well-known Hunter at that time. He introduced her to the world of headhunting and they even went through a short romance together. On the hunting expeditions, they were usually accompanied by a tamed sonruuk named Bufa, who became very attached to Voga. The shared journey with Donner got interrupted only by his collapse induced by heavy addiction to ethanol.

The old contacts were never forgotten and Tien with Bufa were often hired to search for dangerous individuals after Donner rose through the ligan ranks. Voga was trying hard to avoid any direct invitation from Lig-ra to join their fold - she valued her independence too much. Her dead body mutilated by bio-acid was unexpectedly found in 4204 Tu. Neither her respiration mask nor her sonruuk were present at the crime scene.

In 4234 Tu, a vi-log with a wrinkled face of an old Ekhro woman claiming to be the legendary headhunter Tien Voga appeared on the sub-net. Why she faked her own death and spent the rest of the life in seclusion was supposed to be made known from her memoirs, which were to be released after her death. However, the autobiography was never published. After some time, all her logs mysteriously disappeared and the public will thus never learn the real fate of Tien Voga.