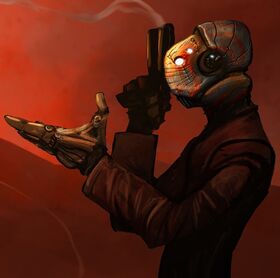 Another member of the dreaded Zapraskal's gang. Tengo belongs to the more 'soft-hearted' part of the gang; he kills his victims quickly and without unnecessary violence in the vein of his less intellectually equipped colleagues like Snakky and Skretto, who revel in spectacular ripping of limbs and gnawing on outreaching body parts. Tengo has character. He likes smart clothes, he uses a spoon, he dines with his relatives on every Haze Day. The young Uufthaka swears on his Belizee, which is how he nicknamed his double-barrelled colt custom-built on far Khalfass. Belizee is made solely of pseudo-ceramic components which makes it virtually undetectable. It is said that Tengo takes the gun with him even to a spa or to an operating room. To his credit though, he only shoots when it is absolutely necessary.

Tengo used to be a sharpshooter in the Šaašox xennocircus. There he learned all the finesses he uses in his trade today - except that he replaced bull's-eye for Zapraskals opponents. Šaašox's executives once found out that Tengo had been stealing from their coffers. He was expelled from the circus under the threat of death and received a lifetime ban on entering the premises ever again.

Tengo secretly despises the other members of Zapraskal's gang, the only exception being the boss and his right-hand man Iel-Kain. If he could, he would get rid of those Snakko-Skrettin rochts once and for all. He would hire his own men instead, skillful Uufthakas like his cousin Mikron. Nevertheless, the leaders do not want to hear a word about it - boneheads are the best guys for the dirtiest business.