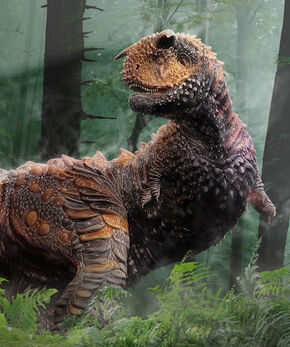 Taran in all its beauty. The lizard can change the color of its skin in a single Om.
(Coraabia Artist: Martin Damir)

There is evidence of this ancient creature - also dubbed taranish lizard or taranish dragon - inhabiting Annor thousands of years before the far-famed race of Annors. Taran is a sturdy herbivorous sauropod. It has an unique ability to change the color of its skin as needed. Tarans often use this change in color tonality as a mean of communication; so far, scientists' attempts to decode which colors correspond to which mood have failed though. It is actually highly probable that every taran couple create their own range of colors for the feelings and signals so that even other members of their own species are unable to understand their meaning. Some of the lizards are still living freely in Annorian nature, some are being kept on breeding farms. The domesticated tarans have lost their ability to change color over the centuries in captivity.

Permits for exporting specimen from the planet are being issued quite rarely. Coraabian government once got a lizard as a gift from Annor after helping to ward off the Ulgoriad affair. Unfortunately, even before it could have been transported from a starport to a xennopark, the taran escaped into the centropolitan streets and had to be pacified by the special forces of Aglomeros.

A female taran lays eggs which differ from each other in their shell's color. Cyan coloured eggs are valued the most in the black market as it is said that the largest tarans hatch from such eggs. Sandy orange eggs, on the contrary, mostly end up in restaurants' kitchens. Tarans born from orange eggs cannot change their color which makes them worthless for the leather industry.