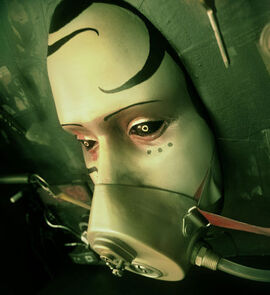 Out of solidarity with Tar Naga, several students organized a charity collection which was supposed to fund the costly completion of the procedure. However, the whole event was a fiasco.
(Coraabia Artist: Oliver Wetter)

Naga has always belonged to the ordered middle class of centropolitan society. For her parents, good education and Miner origin were the most important issues. After finishing her studies, the talented girl started her academic career in a newly developing specialisation neuro-kyberen. After nearly 3 years, she received an exclusive offer from Orbital University which she couldn't ignore. She became the youngest professor in the school's history. Naga was keen on advanced cybernetics and after years of hard work with a team of students, she announced a new project – the linking of the living consciousness with a machine, making it immortal. But the potential risk was too high and so she chose the only possible adept to try it: herself.

The girl had herself implanted into the DNA-computer with gel circuits. The transfer seemed successful. After waking up, she confirmed her ability to see and hear but she wasn't able to produce any sounds and attempts at linking the brain with a bio-router failed. The creation of a 'higher being' soon changed into a dramatic fight for her life.

After 2 months of crisis, her condition stabilized. During the following years, Tar Naga learned a special language which allowed her to communicate with the auto-pod by facial expressions. Now she spends all her time publishing scientific papers and she tries to finish her complete and ultimate digitizing, which is unluckily not financially supported by the university.