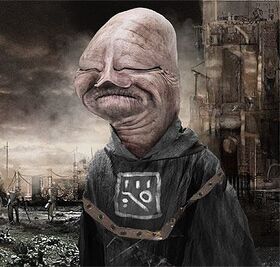 The Order of samaritan takkomonks operates across the multiverse - wherever there is a need to help the incurable ill. The Order employs on its batata plantations various beings, which are not able to work under normal circumstances due to their advanced stages of leprosy, scabity or marrdack plague. During the initiation ritual, each adept puts aside his name and all his property, receiving a monk serial number in return. This act symbolizes the adept's past, which must be forgotten to not distract the monk from his tasks. The secondary mission of takkomonks is collection and evidence of the history of the multiverse. Takkomonks have their shrines even on Khoptid, where they safeguard important knowledge for generations. The Robopope usually releases new encyclical logs only after a thorough consultation with the high-archivers of this centuries-old order.

The monk order is presently lead by The Highest takkomonk #997.905, who -aside from other deeds - pushed through the inclusion of Yach-Log (coraabian Holy book of the unliving) into the commonly accepted khoptidan Algorithm. He was strongly influenced by his very long presence on coraabian plantations, where the takkomonks employed the unliving in the worst stages of the ganglial degeneration.

It is secret that all crops grown on the monk plantations are almost immediately put aside for composting - the contamination of the crops by diseases spread by the incurable farmers prevents their use in the food industry. The farming activity itself only serves to raise hope in the heavily ill individuals that they are contributing to the society.