Difference between revisions of "Sub-mag" 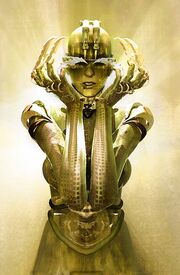 Sub-mag usually uses the most modern hardware and all kinds of custom-made advanced interfaces when manipulating with sub-net.
(Coraabia Artist: Anders Plassgard)

Homeworld: all stringified worlds of Coraabia

Practically from the very creation of the colossal sub-net, first pests have appeared in its heart. They were either individuals or groups of individuals who wanted to steal some valuables or simply secure themselves undying fame in the depths of the sub-space. Mag means something like a machinist in Mogra and the term sub-mag has spread quickly between worlds. The sub-mag community has grown more and more independent during the centuries and also divided itself into closed castes. Virtually all governments have been eventually forced to overpay some sub-mags so that they would use their expertise in defense of transplanetary networks - a security breach from a single hacker into sensitive systems might logically spell disaster for the entire society. In 1501 Tu, an attack directed at the sub-space with the highest level of protection was for the first time considered a capital crime.

It is impossible to enter a sub-mag community as a layman. Adepts spend a whole lifetime preparing for their positions. Only those who have scored at least three breaches of transplanetary importance can join the highest hacker caste Ko-Mag. There are some who would not hesitate to kill to gain entry into Ko-Mag. Naturally, nobody in this caste knows the true identities of their comrades.

In reality, being a sub-mag is a severe addiction combined with fatal virtualization of values. A sub-mag sacrifices everything to his mission. Having a physical body and catering to its needs are just annoying obstacles in front of achieving higher goals. Most sub-mags are connected to an external life support and have their bodies buried in an aerosol which does not cause bedsores, thus being able to continously live in the sub-space for up to half a year.