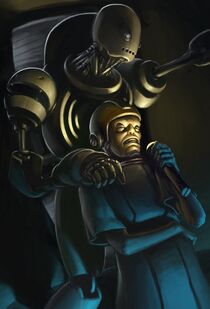 "If I ever see some seaflowers on my desk again, I will take the biggest kvantar I can find at HONK and I will shoot that pervert's head off."
(Coraabia Artist: Calle Korsgren)

Spangle began his career as an ordinary mag-boter in the Corash guilds. There he gained experience he would later put to good use in his job as a Planetary kop. Spangle is clever (or rather cunning), but his lack of concentration and chaotic nature often gets him into sticky situations. This Miners boter is a technician of the [[HONK]] operation group, which is responsible for bot maintenance in most of the centropolitan districts. HONK members are always on the move, solving any problems on the fly. Spangle's relationships with other kops outside of his group are shallow and ambiguous at best. He is especially mad about the fact that kops usually take HONK operatives for smart-ass weirdos, who do not know better than to tinker with their machines and lead geeky conversations.

Spangle used to hack interware of competitor's prototypes back in Corraikh looking for possible weak spots. However, some of the bots got out of the manufacturing complexes and the whole operation was eventually compromised. Police forces then gave Corash mag-boters only two options - to accept their sentence and be imprisoned or to start working for them. Some did not budge due to their professional pride but Spangle accepted the offer immediately.

During a routine Cor-bot maintenance in Sector 4 headquarters, Spangle instantly fell in love with kop Bada. His introvert personality never let him confess this to anyone though. He anonymously sents her bundles of pseudo-seaflowers, candy and kitschy dolls. Using DNA-analysis, Bada quickly found out they came from him and has tried to avoid him ever since.