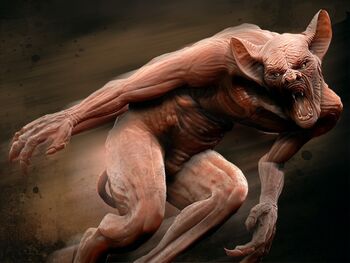 Sorot the crimp - as he was called in the feared Zapraskal's gang - was responsible for recruitment of new members in the streets of the shanty-town. He was usually looking for various renegades, who later worked in the gang as thieves, smugglers or assassins. Since he was rewarded for each new recruit, he was often using very indiscriminate methods. Many of those, who dared to refuse his offer ended up as unmarked bodies in the city mortuaries. After a big police round-up, he denounced his friends Skretty and Snakky to save his own skin. This, however, irritated the gang's leadership and his remnants were found several days later in the furry dates pressing machine.

Sorot was paid for every newly recruited member, so he was lowering the acceptance criteria to the lowest possible level. Once, when he had one of his recruits was brought on stretchers and tried to push him through as a telepathic attack guard, he involuntarily lost three fingers.

The producer of the furry lager did not manage to pull out the brew containing Sorot's remnants, which later became famous as Sorot's elixir and became a sought-after rarity among various quacks and charlatans. Many of them claim to this day that Sorot was in reality an emperor and a powerful [cosmomage].