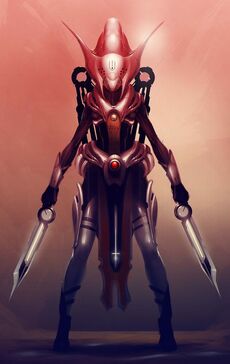 When Eluk "Kovák" Bonn left the post of security commander, he lectured his former subordinates to pursue the goals they really want to achieve. He did not know that young Zara wanted him and motivated by Eluk's speech decided to follow him at all costs. Eluk refused to hire her to his newly established Bonnax agency and her malicious colleagues made her life into a real image of hell. Zara could not be so easily discouraged, however, and worked extremely hard on herself, while hunting down every piece of information about Bonnax and its commisions. She wanted to become so excellent that even Eluk would look her up. After some time, a girl named Nirah appeared on Bonn's side, which enraged Zaru. Fortunately, she manages to win her favor and pretending to be Nirah's friend, she kept poisoning her with lies against Eluk. In the end, the manipulated Nirah left the relationship.

Bonn resisted all Zara's amatory strikes and the young werdio's affection gradually changed to hate. Zara resigned on her effort after some time and tried her luck elsewhere. She met the local Sols on Qu-Puo and joined them after some time. Her next stop became Coraab, where she assisted Sol Norh time to time until his death in 4259 Tu. Sol Zar soon gained control over the whole region.

Contradictory to solmaster's orders, Zar ceased the connections with Zombs and slowly gained prized connections with the talish elite. She traded with luxury good fakes on her own and assured flow of goods for the wealthy miner drug-addicts through the so called rokos string, which led from the Xenozone to Coraab. Sol Zar eventually became so uncontrollable that even her own cast-brothers attempted to kill her several times.