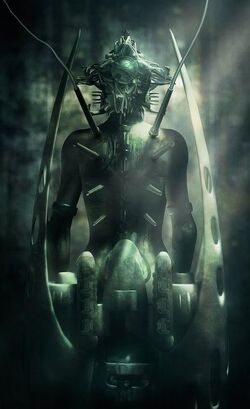 The almost three meters tall Sol Vox stood above everyone else during his training. His throaty voice caused many a kedde a sleep full of nightmares.
(Coraabia Artist: Markus Vogt)

The peaceful life of Cc'tchek and his brothers from the XoC'kcaa tribe changed forever when Sol Sun ordered a tracking unit into the impermeable cucaanian bucCca forests in an attempt to find and destroy the secret base of his trading enemy. Due to an electric storm, the Sols became lost and in the subsequent goalless wandering through the titan-like protojungle stumbled upon the Xo-tchet village. Cc'tchek helped the mograt scientists in his young age and thus he seizes the role of the intermediary. The Sols got to like him, but did not get around well with the other savages. When Cc'tchek's brothers decided to get rid of the strangers one day, Cc'tchek mercilessly killed two of them right in front of the Sols. Later, when the whole unit was found and rescued by a patrolling agrava, Sols decided to take the brave Cc'tcheka with them.

Cc'tchek proved himself as a perceptive student gifted with extraordinary diligence and consistency. After some time, Sol Sun began to use him as a contact person for his trades with stolen archaeological items, which he secretly exports away from CuCaan. The young Xo-tchet was accepted to the caste under the name of Vox. It is a short-cut of the mograt name of the "Vongadu Odda Xoche" alliance, which stands for the "Cucaanian free nations of Xo".

Sol Vox embarked on his own expeditions to hunt down various artefacts of Coraabia. On Golgakk, he managed to retrieve the majority of the after-war confiscated museum collections, which he later sold for almost fortyfold of the original price. From his talish intermediaries he regularly buys ptharian artefacts found on Coraab. He donates a tenth of his income to support the original [CuCaan|cucaanian]] ethnics.