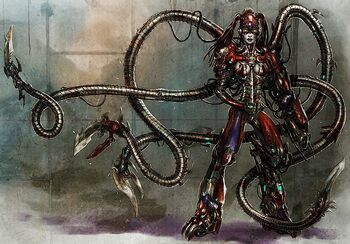 Girl named Akhmi was kidnapped from her home on Rad'Zaak by Ulgoran slavers in her early childhood. She has been sold on their homeworld to a wealthy banker for a large sum. Akhmi however managed to kill her owner soon after, earning herself an death sentence from Ulgoans. But at the trial it is revealed that before murdering the banker, she also disposed of his professionaly trained security guards, and it caused uproar. Luckily for her, Yttoran Armo Xossa interfered and bailed the girl from the trial. Ulgoans protested at first, but eventually gave Akhmi to him. The unlikely pair left for Yttor, where she became Xossa's third wife. The Armo soon revealed himself to be abusive husband and notorious Ethanolic. Akhmi had to get rid of him too.

She exploited Armo's meeting with members of the Sol caste. Xossa plotted a political coup on Yttor and needed allies. Akhmi poisoned her husband during the meeting and dealt with Sols instead of him. Her confident demeanor impressed even the Sol Sor himself. At the end, he didn' support the coup and instead offered Ahkhmi membership among the Sol.

Akhmi agreed and took on a caste name Trixa. For the first time in her life, she could really show her potential nad skills - she had rare tentacular exoskeleton brought form Khalfass, that soon became invaluable ally in combat. Now, Trixa completes one mission after another - she however always tries to find a way to punish Ulgoans for all the suffering they caused to her and for her stolen childhood.