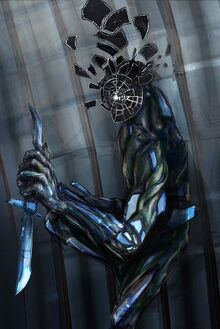 Whenever in action, Iko uses his beloved meta-mask - highly advanced BhuN789-L model from Khalfass. The 2-D plate shields his face and is able to reflect projectiles and shrapnels back at the enemy, using strong kinetic pulses.
(Coraabia Artist: Stephen Cooper)

Original name Iko Thurm, born in Kla'Waska. His fascination by weapons started in early childhood and eventually became his lifelong passion - whether trade or direct use. Iko was especially skilled in sharpshooting, that later brought him among the mercenary Sol caste. They needed his skills, but also an connection on Rad'Zaak that would secure smuggler trails for Khalfass weapons. In 4211 Tu, Thurm recieved his caste name Sol Ikka and lived double life from then on. Coincidentally, he was the only smuggler in the region with trade concession for the Xennozone, so his regular wisits of Khalfass werent suspicious for the authorities. It was there he met the love of his life, young Garama Varga.

Sol Ikka ceased to fly to Khalfass shortly after the heated conflict with khalfassan Republican Army, which killed nearly all of his business associates. All that even more tragic as the attack was encouraged by one of the local Sols, for who Ikka presented a competition. Thurm never mentioned this to Garama.

Sol Ikka haven't died on Yttor as the official sources say. He faked his death get rid of the unwanted attention of his enemies. Solmaster Eru knew all this and offered a helping hand - thanks to him, Ikka lived his last Tu in peace on Bau-Zonda. In 4236 Tu he died suddenly of heart failure. He ever regreted only one thing - leaving his wife and daughter.