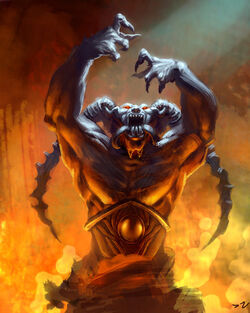 The immense popularity of Sokurr is allegedly responsible for 15% of Coraabian tourism. Some arenas can hold as much as 200,000 spectators.
(Coraabia Artist: Camille Kuo)

The term comes from the Coraabish verb sokhurra (to provoke).

Sokurr originated as a brutal metropolitan pastime which paradoxically helped building bridges between Miners and the Unliving more than most political declarations.

Sokurr is a violent weaponless martial art, where one fighter tries to use any means necessary to force the opponent to say the word Teekai (a humiliated person). The matches can joined no matter one's race or social status. Sokurr matches have various formats: one-on-one (Hakkurr), one-on-two (Raburr), or two-on-two (Koh'Ku).

Sokurr was conceived around 3650 Tu in the peripheral parts of bombarded central Sectors of the centropolis C'Ora. It was originally an illegal pastime of local Miners but some Dung and Ilokajish communities soon joined as well. The new sensation soon spawned a vast underbelly full of illegal bookies and uncertified training facilities. At one point, relatively precise and simple rules were codified and they stayed the same ever since.

In 3872 Tu, Sokurr was finally recognized as a legitimate sport. It never found its way to the Coraabiad for its bloodiness, though. C'Orian officials evetually succumbed to the rising pressure from the general public which was terrified by the growing popularity and the absurd casualty rate of Sokurr. In 3941 Tu, Sokurr was outlawed. Yet its popularity still continued to rise and its matches are held to this day. Security forces in Sector 4 even turn a blind eye on Sokurr, as the local Bal'Teeka (Dome of Humiliation) organizes every Raa'Tol the great centropolitan tournaments, where only the best of the best face each other.

The highest achievement in Sokurr is the title Nu'Sok (True Being), which is awarded only to champions who win twelve matches in a row. 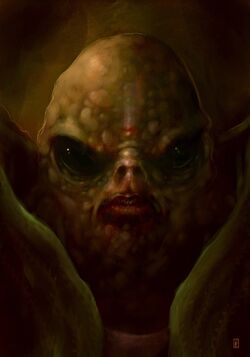