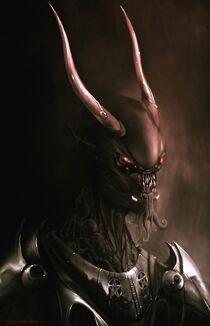 There were several cases when intelligent creatures were interned in the xenoZOO by mistake. Snakky is one of the best known examples of the last century.
(Coraabia Artist: Jason Walsh)

Snakky is a representative of a rare race of semi-intelligent amphibians Sssikth, although he does not even know it himself. Shortly after hatching at his home planet Yttor, he was accidentally caught by a trophy hunter and ended as an exhibit in the Coraabian metropolitan xenoZOO. After several Tus of living in captivity he made a stir when he rudely scolded his zookeeper for keeping him in a dirty cage. With an apology and a bad check for five hundred trins, he was immediately freed and found himself on the street. In an unfamiliar environment, he was soon taken under the wings of Sorot, a member of the criminal Zapraskal's gang, which has been a refuge for similar renegades and castaways for many years. He also showed him the true potential of the dark side of the law.

Snakky capitalized on his knowledge of the xenoZOO when he snuck a group of smugglers around the guards to the cages with rare xiruuks. Unfortunately, his knowledge of the animals themselves was not so great and most of the group spent several Tols in feldshery. Snakky eventually forced the creatures away with a high frequency stridulation of his Sssikth cranial horns.

In Zapraskal's gang, Snakky met Skretty who was spontaneously secreting a mucus of Annorian leeches after suffering an unusual accident. A similar poison is used by Sssikths in ritual ceremonies as a powerful aphrodisiac and therefore Snakky often spent time with Skretty, eventually forming a strange mutual friendship.