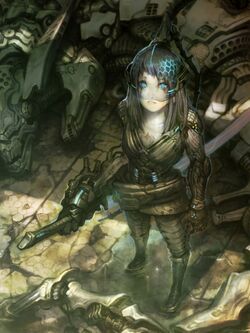 At the young age of 20 Tu, this petite and quiet Miner girl tried to enroll for a sniper post in the elite commandos 3-LAMAE - and she was accepted. The surprised professionals were in awe of her aim, which she intensively practiced with her grandfather (an InCorps veteran) since her childhood. In 4252 Tu, Smuyaka even won a centropolitan junior shooting championship. Her current job differs little from target practice. The sniper's goal is to hit a critical spot of a dangerous bot or android to render them harmless. In her field, Smuyaka has no equal in the entire LAMAE.

Smuyaka has memorized construction details about all major AI production series on Coraab. As the series drastically differ, each one has weaknesses and critical spots located elsewhere. With her customized sport rifle, Smuyaka is capable of hitting a target the size of a coin standing several hundred lants away.

A grotesque case was recorded several Tu ago, when a 3-LAMAE squad was called to action. The snipers were trying to neutralize the threat of two obviously malfunctioning GL9001. Smuyaka hit the bot's fuel cell but instead of expected sparks, the body started spraying bodily fluids. Sadly, the bots were actually ethanolics returning home from a masquerade ball dressed in very authentic costumes.