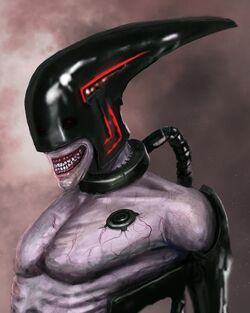 Slintax in an wanted illegal immigrant with an colorfull criminal past. Even thought he came from the Sulcott, he spent most of his life on Pretto. There he became a member of the corrupt unions and gained usefull connections on prettoan jewelry forgers. Slintax later stole from his own accomplices and left for the Xennozone with riddiculous amounts of Xot. He quickly spend all his ill-gained fortune and again got on the bad side of law. After murdering few tourists on Annor, he was forced to leave the Xennozone. In 4263 Tu he came to Coraab, hidden in the container of traxol tobbaco. He found a new home in sub-squatts of Sector 4, where he joined up with the local Ilokai gangs. The Unliving criminals warmly greeted the Ypho among their ranks.

Slintax took part in mall lootings, kidnappings and robbing of wealthy Coraabians. Local Sector kops soon learned about his activities and caught him. The cowardly Ypho exchanged his freedom for the information about his Unliving colleagues. Subsequent raid on the Sub-squatts resulted in mass arrests of the Ilokai. Slintax escaped to the abandoned TolChent docks.

Not long after, three bounty hunters landed on Coraab, paid by the Pretton union, they sook revenge on the Yphoan traitor, who once stole from them. The assassins however never got to the target - they got arrested by the Bahoofa forces right in Bochezai. Not even that is a good news for Slintax - his Unliving "buddies" are leaving the prison in only a few Tu.