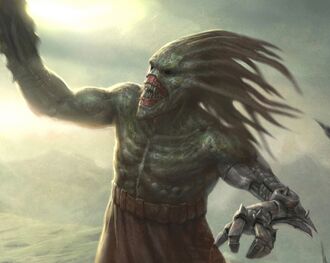 Slemeshek was born into one of the most prestigeous Agan families. His father was armo Norg, a renowned officer publicly known for his refined ways, but a tyrant and ethanolic at home. When Norg's eldest son - later known as ligan Gapeg - publicly accused him of home violence and misuse, the goverment put the investigation to ice and the only result Norg's children got to see as a satisfaction, was more violence. This incident was probably the the last hit that irreversibly damaged Slemeshek's mental health and brought him on the track of a professional assassin and later turned him into a psychopath, who killed solely for the joy of killing. In 4240 Tu, Agan was so afraid of the psychopathic disordered massacres that the officials offered a huge sum on his head. In 4242 Tu, Slemeshek was hunted down and shot by headhunter Beebop.

Slemeshek suffered from psychopathic disorders since his youth. When his parents discovered that he was cutting off heads of his action figures in a trans-like state, they decide to visit a psychotherapist for children. The case was closed with a reason that children are destroying their toys very regularly and will cease this activity once they grow up a bit. When five cut-off heads of Slemeshek's first class mates were found soon after, the doctor refused any connection. Before she had a chance of changing hew opinion, she lost her head as well during one of the therapies with Slemeshek.

Slemeshek's most favourite victims were the subrobysh, whose helmets he liked to archive as trophies. When it happened that one of his law-preserving victims did not have a helmet, Slemeshek had the guts to fill in an official complaint about incomplete uniform dresscode in the Sub-Rob headquarters. Once he even wrote in bold letters that the helmet is a safety priority and saves lives of its wearers in the "Reason" field.