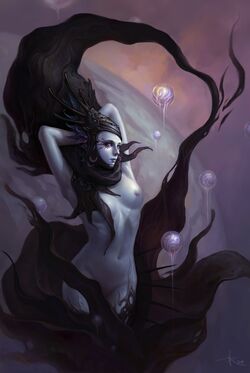 One of the most famous models from BulthaiBaka, Slaqua was one of the first Miner top-models to cast aside the centuries-old conventions by refusing to be overfed just to conform to the standards of Miner beauty. On the other hand - even though she was renowned for her shyness - Slaqua never hesitated to reveal herself more than was considered appropriate. She simply accepted nudity as a natural part of life. This proved to be her undoing. During one of her fashion shows, the thirty-one years old Miner model was assassinated by a poisonous dart. The authorities investigated the murder for several long Tu but the assassins left no traces to follow. After Slaqua's death, her last shots intended for a never-released calendar were auctioned for a record sum - over quarter million trins.

In the beginning of her career, Slaqua Nocta received a modelling offer from Bukella herself. However, when she learned she would have to gain fifty-seven kilograms in two Tols through a drastic frutococktail diet to meet the criteria for joining Kraasox, Slaqua was terrified and politely refused the offer.

All the evidence gathered during the investigation of Nocta's murder led to the Unliving terrorist commandos Unree infamous for their poised puritan beliefs. Yet due to insufficient evidence, the case was postponed, which raised a wave of public unrest. Soon after, various cells of Unree had to face revenge attacks from self-styled avengers recruited from the model's die-hard fan-base.