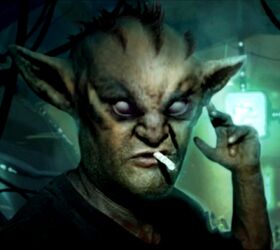 Already at a young age, Skretty got into such trouble because of his involvement in selling fake arms he was esentially forced to flee his homeworld of Coraab in fear of both the police and the underworld. For several Tu, he worked as an illegal laborer in Annorian breeding ponds. He was used as a living bait for leeches that were bred for caviar production in local swamps. After one dreadful night when the last shift forgot to pull him out of the water, the foreman sent him off the planet in fear of being arrested. Skretty ended up in Coraabian docks once again. There he met Snakky and Sorot, members of the infamous Zapraskal's gang.

Among the victims of Skretty's fake weapons belonged a group of twenty gangsters that tried to rob an armored cash transport car. Its single security guard then gunned down eleven of them, severely hurt three others and scared off the rest. Several cheap fake plastic microwave rifles were found on the crime scene.

Skretty grew close to Snakky during their time in Zapraskal's gang. The Annorian leech poison seeped deep into Skretty's internal organs, releasing an extremely vile odor that only Snakky could tolerate and which actually strangely attracted him.