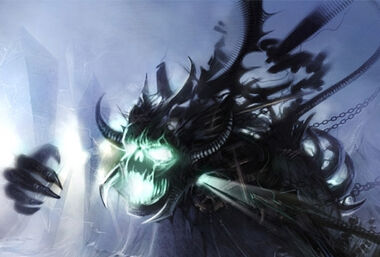 At first, I heard some whistling, the printer head exploded and lights went off. Something banged and sparks ignited the room. That rochty ko-magan sillic destroyed several Tu worth of work in a few Oms. - Ukk'Bu
(Coraabia Artist: Shay)

These physiologically transitional beings only rarely materialize in the real world. Sillico is in fact a result of rampaging sub-net virus, which can take control of means of production and create a physical avatar of itself. Sillico-virus usually attacks poorly secured home 3D-printers connected to sub-net. Throught them it "prints" itself in a form of a sillicone demon that wreaks havoc all around itself. The sillico-avatar demolishes the house or office with strong electromagnetic pulses, sometimes passing through the wiring to the nearest power station, where it explodes. Sillicos were used for terrorist attacks and intimidation in the past; today, they are mostly a popular curiosity.

The vast majority of the sub-ware producers had to invest substantial sums into product security in the past because of ever-growing numbers of sillico attacks. Newer generations of antiviruses offer security measures too advanced for sillico to pass through and manifest itself physically.

Probably the most famous sillico attack happened in 4030 Tu on Cosmopolitan world Kogan. The assembly lines of a hacked gel circuit factory started to produce tens of thousands of these sillicone demons that ripped apart the whole factory along with the local metropolis Ogreko-Skak.