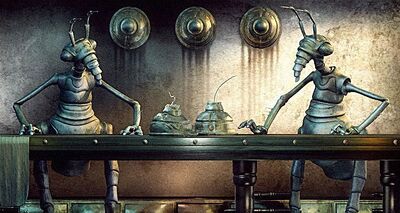 Seven times awarded by the prestigeous Xennobartender of the year award Shosho-San began his career in ruins of devastated [Sector 4]] as an ordinary waiter in infamous Kapiba Shrunn. Shosho-San (as all members of his meta-insect race) doesn't have high life expectancy and so focuses all his effort on building his career. It's not long after he opened Golden ZanX in prestigeous district Kocharra but it's already one of the most visited establishments all around. "Shoshoun" (as he is nicknamed by friends) became famous mostly because of his unique cocktail receptures that satisfy even the most demanding customers. Probably the most famous event in his pub is so called Bokorony's hour when customers are able to re-order the same drink or food for free.

Shosho-San's establishment follows a simple creed - bouncing guests is humiliating for both sides. Only the most trusted guests from high society can hope to get reservation in the Golden ZanX. Guests who can not behave get strong hypnotics snuck ito their drinks, so they won't bother other guests or cause a scandal.

Ulli-mants look all the same and no layman can tell one from another. There were at least eight sub-net reports of Shosho-San's grand opening of new establishmen, every single one of them being faked by some of his former colleagues or aquaintances. Rumor has it that Shosho-San is in fact dead and Golden ZanX is now run by his cousin.