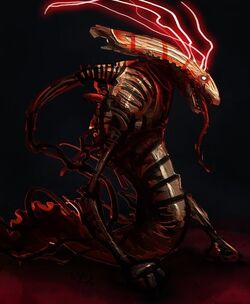 This latak, born as a remote cousin of the famous xenohunter Botcahoof, is an outcast from the significant Botca dynasty. The unmanageable and problematic Latak has a great passion for hunting, a trait present in his family since anyone can remember. Together with his cousin he was member of the xenohunter guild DuRuukur. Lug was never very much liked in the guild and even Botcahoof usually tried to evade him whenever possible. After a plethora of insults, his patience ran over the top during one of the expeditions and Lug killed five members of the guild using explosives. The only survivor was Hoofs, whom he decided to spare. After this incident, Lug knew that he will have to leave Khalfass forever. In 4243 Tu he embarked on a journey to Coraab, where he met Sorot. It did not take long for Lug to become a member of the Zapraskal's gang under a new name - Shiloog.

Zapraskal became fond of the young Latak and allowed Shiloog to accompany him on every important meeting. His hunting abilities made him a feared killer. During one contract meeting, Iel-Kain got into a disagreement with Toxians regarding sale of hypnosteron, which ended up in bloodbath. Shiloog saved the boss of the gang from bio-acid caustic burns with his own body. Zapraskal returned this favor by paying for kyborgisation of the injured body parts.

Shiloog secretly gathered information from Khalfass about his family. After he heard of Botcahoof's plan to hunt down the daemon B'Khelit, he wished nothing else than to embark on Grannok and kill the daemon before his cousin. This would help him discredit him and perhaps even regain the respect of his own family. Zapraskal refused to release him to carry out this mission, however - he believes that Shiloog's place is on Coraab and should remain so...