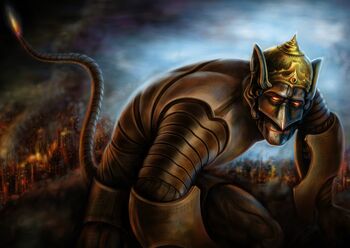 In the Ulgo language known also as Shanawataga (Abundandly plated). Shan Tawas are a scarecrows on the past, evil and mean mythical beasts that steal, damage and hurt honored Ulgoran citizens. It is not and coincidence that Shan Tawas resemble Werdios and Mogras - Ulgos were at first terrified of humanoid nations, maily because of their horrific and alien look. Some traditions even say that a new house has to be sanctified so that Shan Tawa can not enter it. That usually means to hang pouch of holy Duuflga dust over the entrance. Some especially superstitious Ulgos even perform and Ulwagashanna ritual inside the house, during which they corrode several allegorical statues with their saliva.

There has been a saying among the Ulgoans that if even one Shan Tawa would ever leave it's plated armor, the civilisation will come to an end. There is some rational thought behind this - humanoids that visit Ulgor have to wear protective suits in the planet's extreme environment. Breaching the suit or leaving it would probably cause severe and irreversible damage to the unique ecosystem of Ulgoan environment.

Ancient myths of malicious Shan Tawas are based on some truth. When the first immigrants came to Ulgor, they were often punished by the Ulgos by being encased in heavy and bulky plate armor. Most of these prisoners soon went insane or commited suicide. Only constant pressure of Agan's diplomacy helped to put an end to this sadistic form of punishment.