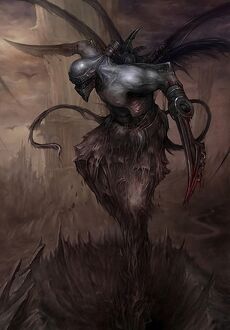 Even the oldest of Unliving min-logs mention a being known as Shagtak. It is said that the mighty creature once arised as a result of mixing a Zomb genome with that of the cosmic Nu'Beings. Shagtak would ceaselessly drive countless hordes of fanatic Unliving across Coraab; doom and suffering soon ruled everywhere his worshipers arrived. The bloodthirsty 'demigod' took pleasure in personally joining the battles. Winged by a weird mechanical harness, he attacked his enemies from the skies as his ecstatic shrieks resounded to hundreds of miles. It is no wonder Shagtak's savage cohorts were nicknamed Wa'Ilkarra - Those who scream. The triumphal campaign was ended only at the epic battle of Lake Wat-Pagae.

Practically speaking, only Vatters were joining Shagtak's troops: Dungs, Joobos and Corostennos praised him as a Son of God. On the contrary, Ilokaji and Atomi allegedly held this bloodthirsty sadist in utter contempt. Zombs avoided him as much as possible; the crossbreed aroused pure panic among them.

According to an old legend, Wat-Pagan himself defeated Shagtak at the bank of the ancient radioactive lake. What is more, some of the earliest copies of Yach-Log mention how Wat-Pagan singlehandedly devoured Shagtak's darkness once and for all. It is whispered in some circles of skeptical historians that the epic battle never happened – that it was in fact added to the legend by some sensationalistic traditionalists. If we believe this interpretation, the Battle of Wat-Pagae was simply an individual fight to unlife and death between the two leaders.