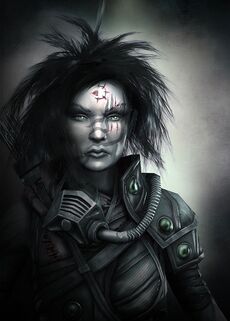 Scara has a clearly visible tattoo of insignia of the mighty Vargs of Khalfass on her forehead. By coincidence, only 2 Vargs are still alive today - Scara and her mother Gara.
(Coraabia Artist: Paul Tosca)

Scara spent her childhood in Khalfassan woods. She left the native planet soon though, as her mother (later known as Sol Gara) left for Rad'Zaak. At the early age of seventeen, Varga joined the local military forces but left the service prematurely due to non-compliance with the command. Shortly after her mother entered the Sol caste and forever severed all family ties, the freshly adult Scara flew from Rad'Zaak to Coraab. She spent many years in the service of a powerful Min'Orian Zomb Valigursai there. Currently, this ambitious woman chairs the secretariat of the Thun hunting club, which is responsible for maintaining the numbers of invasive species in the sacred Unliving conurbation and in all its adjacent domains.

Scara Varga hates her mother for abandoning her in the pursuit of career. She lives a loner's life now – her only loyal companion is a specially trained xiruuk, whom she illegally brought to Coraab from a business trip to Annor years ago. Since then her Gali-chi (as Scara familiarly titles him) accompanies her on every step.

Scara is an exceptionally talented automatic duralumin bow archer, an extremely rare sight on Coraab. She had to demonstrate her skills on more than a single occasion while working for Valigursai, who held monstrous banquets for his honorable guests. She was able to hit the bullseye at a distance of one kilometer, where the target was placed on one of the Zomb's servants.