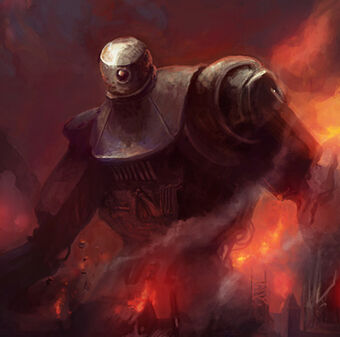 The eyes of pain caused our strain a tonnar of pain and suffering. I will never allow similar machines to be ever made again, they are an insult to our existence! - The Irradiated One • 4118 Tu
(Coraabia Artist: Giuliano Bròcani)

Also called Sonh'Bokha (The Eye of Pain). It took only one hundred Tu since the heyday of the radical anti-tech movement Wat Wonght! for the feared dictator Tal Honta to start mass producing artificial intelligence again. The Sado series were bots specifically designed to uproot any potential Unliving resistance oovements. The series basically came in three models - Luppo armed with a high caliber pyrokarr capable of roasting the enemy from several tens of meters. Onto was armed with a 50kW laser cannon that could easily shoot down a smaller antigrav or vehicle. The limited edition Nebu had a wholly different purpose - brutal torture of those "lucky" enough to survive the assault units' onslaught.

During Honta's reign of terror, Sado-bots murdered and tortured to death nearly eight hundred thousand Unliving, thus orchestrating one of the largest genocides in the history of the Centropolis. The machines therefore became a symbol of Miners' oppressive rule in the last years of the third millenium. Symbolically, after his forced abdication, Honta was publicly executed by two confiscated Nebu Sado-bots.

1300 Tu later in the ruins of Zaan Rupree's palace, commando Ujang found a charred torso of the last Sado-bot on Coraab. After hacking its interware, the boters were shocked to learn that the machine was working in perfect condition to its very last moments. The Min'Orian Zomb had a lot to explain to his Unliving kinsmen - a holo-record from Sado-bot's eye painted him in truly horrific colors.