Ruuk is a term referring to a numerous group of breeds of higher fauna of the Xenozone. 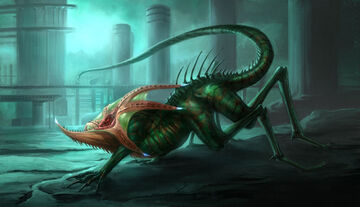 Keiruuk - this ruuk faces extinction on today's Annor as its traditional territories have been completely filled with industrial landscape.
(Coraabia Artist: Marissa Rivera)

First ruuks were discovered by Annorian tribes around 580 Tu. New and new breeds of these exotic, mostly predatorial and dangerous creatures have been, and still are, found on many other worlds.

Ruuks are complex organisms with various bases (depending on their homeworld). The most common basic elements are carbon, silicon, nitrogen, phosphorus, or boron, rarely also buroten, di-buroten, or tri-buroten.

The vast majority of ruuk breeds possesses one or more pairs of limbs and strong muscles. Ruuks are slithering, running, or flying. They are perfectly adapted to their specific environment, which makes it however also very difficult to transport to new areas - experience like the Ulgoriad are clear. 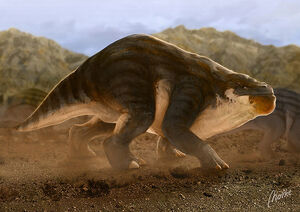 Centuries of selective breeding experiments resulted in many ruuk breeds changing into agriculturally or industrially useful creatures. Outside of the Xenozone though, their numbers remain low. The undisputed leader in ruuk numbers is Annor.

In ruuk trade, one specimen is referred to as ruu. In some un-xotized regions of Annor, the currency ruu is still in circulation.

The numbers take into account all planets with documented breeding.

Ruuk hunting has been on dramatic rise in the last centuries. Ruuks are killed by thousands as an aristocratic pastime or because of poachers. It is said that the ruuk trade in Coraabia has rose thousand times in the last thousand Tu.