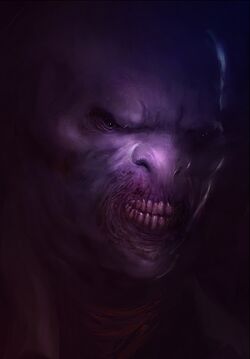 A crude Ydranian, who is nicknamed Rekrmich and also Krmidzhich and whose real name is Umysda Serd-Snot, punctually represents the archetype of a fan of a harsh dungish sport Un-Nom-Pak. These bloody Unliving jousts are being held on Coraab for millenniums and it could be said that in every stage of history they attract a simmilar sort of viewers. The local environment full of illegal bets and mass fan fights is an ideal base for existence for Rekrmich. He gets to Un-Nom-Pak from an early age when his adoptive father, whom he hates because his father roots for rival brood Joobo-Habuta, takes him to the fights. Once, when there is a bedlam in the fans‘ circle, Umysda joins the side of opponent and beats his soul out of his foster father. It is his first step to his descending career as a persistent offender.

His nickname suggests that Rekrmich is a hard-core fan of the nomdungsish litter Vat Rekrmich. He joins into mass fights in arenas with pleasure. Their results are inclused to the total score of the fights by tradition. Rekrmich is famous for his zeal for the game. His insane screaming always spreads very far. He then doesn’t hesitate to be always in the boozer with his accomplices during breaks.

The agresive Rekrmich has a favorite tacitc how to cause havoc in the house. He always bursts into the doors shouting Khe Re'krmmah! (Rekrmich!). When the guests don’t answer him with the same shout he starts to threaten them with extermination. It all ends up as a skirmish in the end. Sometimes, these provocative methods backfire at Rekrmich; for example that time when he bursted into the annual meeting of miiwort community.