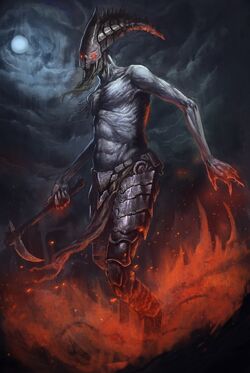 Ilokajish separatist Reeshta is one of the infamous leaders of top secret commandos Unree. The now notorious Reeshta first made headlines after a bomb attack that took place in C'Ora in 4015 Tu. A rag-tag group of independent radicals procures a bio-bomb from an Antu smuggler Undang and detonates it in a monograv of an esteemed Miner official. The group is composed of the Unliving from the very lowest segment of the underclass but Reeshta's masterful manipulation turns them into radicals ready to sacrifice everything. The name Reeshta is uttered in Unree with utmost respect despite the fact that most members never personally met him. A carefully fabricated myth claims that his touch gives limitless strength and his blessing energizes tired muscles.

Reeshta is supposed to hail from the famous Unliving brood Bulk'Ilokho. These Ilokaji are known for their longevity and parapsychic abilities that crudely mirror those of Zombs. Min'Orian logs say that Reeshta left his pouch around 3827 Tu. Since 4015 Tu, Reeshta was supposedly captured many times but it was always just one of the lower ranked officers of Unree that never even met their leader.

The true identity of Ilokaj Reeshta was a riddle solved by an influential Zaan named Naavor Kai, who promptly killed all witnesses to keep it secret again. The true Reeshta spends his time in a masterfully hidden bunker in the regions of Antha while many other officers assume his identity on their missions. The leaders of commandos Unree created Project Reeshta to give the "lifescum" a name to fear.