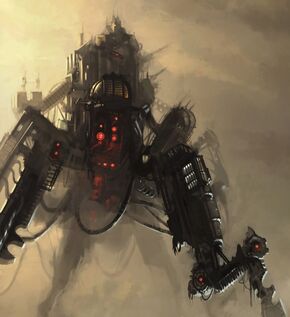 Red Colossus weighs as much as 600 tons and carries a wide arsenal of Reddan weaponry designed for annihilation of land-based targets.
(Coraabia Artist: Slawomir Maniak)

A series of self-propelled battle units WOG°1800R known as the Red Colossus was meant to be the flagship of land forces of Redds during their planned occupation of Coraab and its deposits of rare resources. Yet the unexpected Coraabian nuclear counterattack forced the Red Command to refocus its strategy and machine production for many years; direct military operations against Coraab were postponed indefinitely. This also put an end to further production of Red Colossi - titanic walking machines capable of unleashing hell on all enemies in sight. They were replaced by cheaper and more compact series Destro and Omega, which were much more suitable for the smaller diversionary actions the Red Command has been employing against its organic enemies ever since.

Red Colossi were not sent out to the battlefield in attack squads since each of the machines had a small built-in hydrogen reactor which could have been remotely detonated in case of sustaining irreversible damage. These walking bombs thus had to attack virtually alone, with wide spacing between individual units and without any extensive support of infantry. This made them very inflexible, which in turn led to the gradual phasing out of their production.

The police boter Spangle once hacked a Red Colossus unit displayed in a technology museum in a clutch effort to turn it on and use it to save Sector 4 from a rioting xenophobic mob. The giant machine scattered the lynching crowd instantly but its control unit broke down almost immediately afterwards and its spectatular fall blew the newly renovated Sector town hall to smithereens.